So where are all the poets? 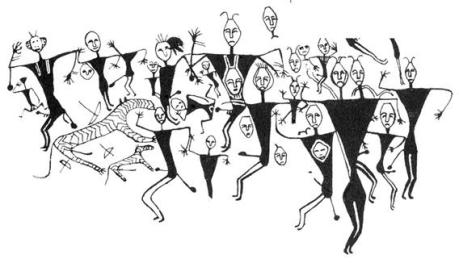 Again, amid the masses of papyri hidden in the ancient ruins of Oxyrhynchus, Egypt, archeologists and researchers discovered a tantalizing fragment of a sex manual, a work of art by a Greek woman called Philaenis. This find provided even more shocking because it revealed that women of Greco-Roman times not only behaved as lasciviously as men, but they also wrote about the imaginative sex they’d had (and/or had fantasized). ¶ Philaneis lived during Hellenistic times, on the Greek island of Samos or perhaps or perhaps Leicidia (accounts disagree). She may have been the courtesan that inspired the coining of the word pornography. Whatever her day job, she began her literary odyssey by coming up with the killer title of her book. She called it On Indecent Kisses. her erotic manual was clearly popular (judging by its mention by other writers, plus the number of papyrus fragments found at multiple sites), and centuries later would provide inspiration for Ovid’s bestselling Ars Amatoria (the Art of Love.) [p. 37]

And so, when I read about poets and/or publications touting their bona fides as writers and publishers of trending, out-of-the-mainstream poetry because they’ve invented a new typography, a new way to upend syntax and grammar, or a freer way to make free verse free all in the name of socially accepted and approved content, the whole notion of avant garde flies right out the window.

Poetry that actually excites the reader.

I haven’t read the collection from cover to cover, but I’ve read enough to include it among my favorites. The poems are, that I’ve read so far, all free verse but for a poem by Molly Peacock called Lullaby, it starts:

Big as a down duvet the night
pulls the close Ontario sky
over the naked earth. Here we lie
gossiping in a circle of light
·
under our own big comforter,
buried nude as bulbs. I slide south
to grow your hyacinth in my mouth.
[…] [p. 40]

[…]I want to lay
you, on a bed without a towel, without a curtain, without a good enough
reason. I want to wear a white dress stained with certain possibility, like an autograph
like a river’s ripe with spawn, like a signpost, like a season,
like a dam come all undone. [Wet, p. 116]

Not to miss is the nice internal rhyme of reason and season along with the pun on dam (and damn) in the last line. This is good stuff.

at my desk
the screen blinks on
numbers begin their race
but inside me, the throb
of your last morning thrusts
continue, echo
you in me […] [p. 65]

To poems that aren’t strictly a celebration of temptation and pleasure:

you push your mouth against mine
i want to tell you
you have come to the wounded for healing.
like you, i am
imperfect flesh, and my
experience of violence has made me
no less likely to harm you [….]

[…]
Tonight when I close my eyes
the sky will fill with lovers
binding the wrists of lovers,
the night will tie its blindfold
over the earth’s eyes, and I will
dream of how to speak—oh
·
kiss me with lips I have to imagine;
hold me in a room I can’t escape.

Not that’s poetry, poetry that excites the reader, that’s truly on the fringes of the approved, and that carries on the nearly silenced voices of Sappho and Philaenis.