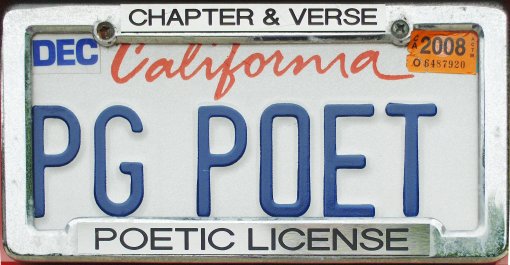 The Poet’s name is Neal Whitman and he contributes to a fine blog called Getting Something Read: Short Works for the Peripatetic Web Surfer, with some of the best online poetry I have read. (Click on the plates to visit.) The latest is by Kristina Baer, Only Water, and a beautiful read. The PG stands for Pacific Grove, California. Pacific Grove, all by itself, probably has more people in it than all of Vermont. I am chastened.

Anyway, I herewith start my Poet license plate collection. Any and all poets with the unmitigated arrogance and hubris to declare themselves a poet to God and state trooper is invited to send me their license plate. I will add it to my widgets as a link!

It’s been about two and a half weeks since Orr’s article appeared.

But Orr studiously avoids answering the question and for obvious reason: It’s not for the critic to answer. It’s for the next Great Poet. And that leads to the next series of questions: Where’s the ambition? Where’s the Great Poetry? Where are the Great Poets?

My apologies to Bloggers if I haven’t picked your choice passage – it wasn’t intentional.

In no particular order (and not including my own responses), here are some of  Orr’s Respondents:

HG Poetics tries to pick up where Orr left off, seeking to define Greatness.

It seems to me there are 3 characteristics, displayed by the great poet, which determine this unusual situation :

1) A powerful, synthetic intellect, able to grasp wide spheres of life & discourse, and translate them into a new, unique order.
2) A strong will, determined to engage with the world, with its most difficult practical, moral & theoretical cruxes, riddles, problems. A dramatically-engaged personality.
3) An original, masterful combination of artistic talent and sensibility.

Digital Emunction offers up a youtube link with a clip from Talladega Nights: The Ballad of Ricky Bobby (2006): “I wake up in the morning and piss excellence!” – as a way to satirize the kind of poet Orr is accused of looking for.

This clip is followed by seven good comments, including one by Robert P. Baird: I guess I should say, too, that I think it’s a splen­did thing for poets to have world-​eating ambi­tion–as Jack says, why not?–but I also think that Orr is flat wrong to follow Hall in blam­ing the lack of self-​consciously great work on a lack of ambi­tion. Sim­i­larly it seems pretty dumb to say that poetry can’t or won’t sur­vive with­out a ready font of great­ness in its midst. What Orr is really com­plain­ing about–and I can’t quite figure out if he rec­og­nizes it or not, though he prob­a­bly does–is not the absence of poetic great­ness but the gen­eral culture’s indif­fer­ence to poetic great­ness.

Clusterflock.Org (I suppose [Orr] can’t imagine there’s another Dickinson lurking around right now who hasn’t been noticed.) Nor does he seem to acknowledge that Dickinson’s poems do not ‘look’ great–they’re short, personal and often obscure–nor that a poet like Sappho has endured more than 2000 years on likewise tiny poems. To me, Orr’s questions seem too utterly American and far too narrow, though I won’t deny that he makes some astute observations.

Zachariah Wells writes: Orr’s piece reminds me of another favourite poet of Ashbery’s–and of mine–John Clare, a poet in many ways similar in sensibility to Elizabeth Bishop: a poet who values a close look at a small thing more than the windy effusions of ego favoured by his elder contemporary, Wordsworth the Great. (Not that Clare couldn’t turn on the rhetoric when he wanted to.) The ambition is more humble, and for a long time Clare’s work was neglected and ignored, or dismissed as quirky.

HTMLGIANT writes: Anyway, despite the basic dopiness of claiming that poetry must at all times seek to obtain capital-i Immortality, and at that only by first obtaining to the status of High Art (whatever that is), Orr actually has some real points to make, and I can’t stay quite as annoyed as I’d like to. For one thing, he busts out this Donald Hall quote from 1983, where Hall, writing in the Kenyon Review, accused “contemporary American poetry” of being “afflicted by modesty of ambition.” I’m with Hall on this one, and with Orr for being with Hall–the fact that a full generation later (Taylor, Justin: b. 1982) nothing much has changed actually lends a lot of credence to Orr’s basic–yet still irritating–claim that perhaps the Poetical Climate Change is in fact irreversible…

Amy King writes On Greatness and them that do it: There is no set goal in the “game” of poetry, though Orr’s comparison sets the terms as such (i.e. John Ashbery’s Library of America collection).  How do sports metaphors of the competitive masculine variety so often wiggle their way into measuring poetry and her cultural cache?   What team am I playing for again?  Where’s the goal line?  Who do I have to smear to get there?   Are my subjects suitably dainty as I take up the stick?

On When Falls the Coliseum Christopher Guerin writes: David Orr’s recent New York Times Book Review essay on greatness in poetry is a bland bit of punting. I’ve read it twice and I still don’t understand what he’s trying to say. The main thesis, that defining greatness in poetry is very difficult to do, is obvious enough, but he never makes the attempt himself. Taking John Ashbery as his last great poet — apparently just because the Library of America has chosen to release his collected works — sets the essay off on the wrong course from the beginning. Richard Wilbur, anyone?

Edward Byrne at One Poet’s Notes writes: Much has been made this weekend on writers’ individual blogs or email literary lists about the content and tenor of David Orr’s valuable and thought-provoking article in the New York Times, “The Great(ness) Game.” Some of the online commentary has focused upon questioning ambiguous definitions of “greatness” or the accuracy in Orr’s portrait of contemporary poetry, particularly his perceptions of college writing programs and a tendency toward careerism evident among those in the current community of authors. As with Orr’s essay, all of the opinions I have seen online so far have been interesting and insightful, have engendered discussion or debate, and have initiated some serious reflection. 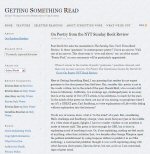 Neal Whitman at Getting Something Read writes:  Here at Getting Something Read, I am guessing that readers do not expect greatness in the short poems they find here. But, consider this: poetry is not in the words written, but in the mind of the poet. Donald Hall, who wowed a full house in Monterey, California, two evenings ago, challenged poets, in an essay that is at the center of Orr’s NYT article, to be ambitious, to reach for the stars. In the minds of the poets out there, are any of you aiming, to paraphrase (dare I say it?) a GREAT poet, Carl Sandburg, to write explanations of Life swiftly fading without explanation into the horizons?

At A Compulsive Reader an NYTBR Reader Responses to ‘Greatness’: A wide range of interesting responses, similar to the wide ranging immediate blog-responses.  These letters represent a markedly different response than it seemed many of the blog responses that I came across.  Reeve in particular I think hits on an interesting notion that has been danced around to some extent on this page.  The idea of the conglomeration-publishing-house not allowing interesting, unique voices to rise to the fore.  And I think it is a good point.  It is virtually impossible for one single voice to cause enough of a disruption to shake such the massive structures that these publishing companies have become. 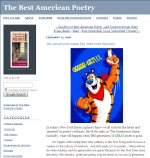 At The Best American Poetry John Emil Vincent writes: Orr blames this on postmodernism’s questioning of “Truth, Beauty, [and] Justice.” But simple sense might tell us that as history progresses, we have fewer and fewer filters (years, critics, just plain old historic contingency) through which poetry must pass to get to us eager readers. Contemporary poetry is precisely that, contemporary, these poems haven’t been around long enough to have dependable gauges of “greatness”… 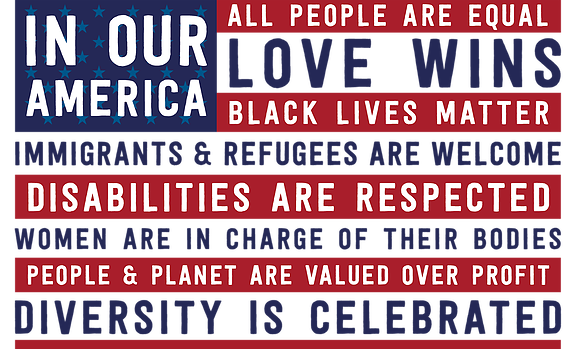