Told on the Seventh Day, after Tsi Tung’s Tale

The seventh day would be their last together. Already, the road met its first branch, at which some would depart. They all had saved their finest meats and wines for this night and their servants, some hunting game while others built the fire and prepared the spits, worked together and looked forward to the final tale as much as the merchants. At last, Lao Chi stood, his purple robes glowing warmly by the firelight. 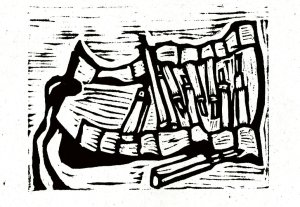 I was born where the Yangtze meets the Han river. Now I only wish to return there. I yearn for my family and all I think on are my little daughters playing the reeds I have cut into flutes for them. As perhaps you know, the reeds blossom every autumn in the great valleys of the Yangtze and Han rivers. I would trade all my wood and ivory, copper and gold, to hear my daughters play for me tonight. Here is an old story that makes me homesick.

Shir-li’s favorite pond was in a village by the banks of the Yangtze. She was a swan. When the villagers saw her they often said to one another: “In our next lives perhaps we will be like her.” Shir-li, however, dreamt of becoming like them. She remained one autumn even after the wind had driven away the last leaves.  The villagers worried for the swan. They sent for the monk, Hui-nêng. “The swan has forgotten her true nature,” they said to him, “she forgets to flee when winter approaches.” The great monk came to the village.

He came in the evening and sat by the pond. The villagers who brought him wine and dried fish said that he and the swan spoke. Hui-nêng remained until dawn and left before anyone else had woken. The swan was gone. The villagers rejoiced but were also surprised. A naked woman lay beside the water. Her skin was as white as a swan’s feathers. All were astounded. The woman was quickly taken into a home and made warm with wine and incense.  When the villagers asked from where she had come she could only answer: “Shir-li.”

The villagers did not know what to do at first. Then one among them taught her to weave and Shir-li’s skill soon surpassed the best. As one new to the world she learned easily. When Shir-li ran out of thread one day her companions, an elder woman of the village, laughed at her. “You should use your hair, Shir-li,” she said, “it is the most beautiful I have ever seen and I’ll bet it is as strong as any silken thread.” The woman cut a long strand which fell to Shir-li’s waist. Shir-li gasped. A strange and beautiful song entered her heart.

The song foretold the old woman’s life. When Shir-li finished the old woman whispered: “You are a spirit. I will tell no one.” Yet it wasn’t nightfall before the village knew. Two young lovers were the first to come to Shir-li. The girl offered Shir-li her most precious dress which Shir-li accepted. Then the girl cut a long strand of Shir-li’s hair. The strange and beautiful song came again foretelling a happy life. The lovers kissed when they heard this. Shir-li gasped dropping the dress the girl had given her. This kiss was beautiful and Shir-li suddenly wished to understand it most of all.

The villagers wanted to protect Shir-li but they could not keep her songs a secret. On a day in November, having been a year since becoming a woman, Shir-li was suddenly taken from the village and brought before the Emperor. He asked who she was. When she made no answer he asked her if she would marry him. He was moved by her beauty. “You may share in anything I possess,” he said, “and have whatever you desire.” Shir-li touched her lips but the Emperor did not understand her gesture.

The Emperor gave her a house in his garden. “The house is yours,” he said, “but you may not leave the garden.” He also had a little girl brought to her. “Her name is Tsing-Pai,” he said, “and she will be your servant.” One day he brought a painted fan made by his finest craftsmen. He said: “When this fan is folded it is like life.” Then the Emperor unfolded the fan and held it to the light. “It is called lovers at Lotus Stream,” he said. “You can unfold life, like this fan, and see what we are blind to.” Shir-li saw that the lovers were kissing. She touched the painting where the lips of the lovers met but even then the Emperor did not understand. “Marry me,” he said, “for with you there is nothing I cannot do.”

The Emperor brought gifts. Yet each time he also took a strand of Shir-li’s hair to cause her to sing to him. His armies triumphed. The lands of his empire increased. One day the little girl, Tsing-Pai, said to her: “Do you not know why the Emperor comes to you?” Shir-li could not answer. “He comes because he wishes to know the future,” the girl said, “and many women and men suffer because of his greed. Do you not know how his armies overtake the country? My father pledged my service to the Emperor because he feared him. He signed my life to the Emperor with a jade quill. What is a jade quill worth? Does it weep? Does it laugh? Does it dream? I do all these things but what was I worth to my father? He would rather have his jade quill than me. It believes that is where his wealth lies.” Shir-li wept.

When the Emperor came to her that day he was followed my many men. They were dressed in robes throated with gold and silver. Each held a gift. “All these things,” said the Emperor, “if you will marry me.” Shir-li held Tsing Pai’s hand. She looked at the jade the sandalwood carvings, vases, paintings and calligraphy. Then she took a strand of her own hair. She knelt beside Tsing Pai and wrapped it round the girl’s smallest finger. Then, with the suddenness of  understanding, she kissed. She kissed the girl’s forehead. “What choice is this?” asked the Emperor. “I offer you my wealth, myself, and my kingdom and you choose this girl!” Then,  finally, Shir-li spoke. She whispered: “I choose love.”

“You will never leave this garden,” said Tsing Pai one afternoon. “The Emperor will keep you here as though you were a butterfly in an ivory jar. The walls of the garden are too steep to climb. I am too small for you to stand upon my shoulders.” Shir-li and the girl walked hand in hand along the length of the garden wall. When the moon rose with the coming of night Shir-li finally knelt beside a brook. She kissed the girl again, smiling. Then she took a blade from her robe and began to cut her hair. And as she did so her hair was carried off by the brook. “Why do your hands tremble?” Tsing Pai asked. She took the blade from Shir-li’s hands, who could not finish. When the last strand of Shir-li’s hair was cut the girl gasped. Before her was a beautiful swan.

Shir-li grasped the girl’s wrist in her beak and pulled her onto her back. Then her powerful wings lifted them both into the air. They soared over the garden wall. The girl hid her eyes in Shir-li’s back. Nor did she look up again until it was morning and a great sea appeared below them. Shir-li carried the girl to a seaside village. When the villagers saw the girl brought by the swan they thought she was a spirit of good fortune and treated her as kindly as one of their own children. Shir-li did not remain long. Autumn had followed them closely. Yet before she left, never to be seen again, Shir-li lifted the tip of her wings to the girl’s lips as if to kiss her. Tsing Pai, though she was never certain, thought that Shir-li laughed as she next rose into the air.

When Tsing Pai was old enough she searched for Shir-li. She arrived in autumn at the village Shir-li had once described. The monk Hui-nêng, now old with only a wisp of  hair, sat by the river’s bank playing a reed flute. Tsing Pai bowed. She said: “This is the voice of Shir-li.” “The reeds are beautiful in autumn,” Hui-nêng answered. Then Tsing Pai saw the river’s banks covered by the white blossoming reeds. “Where do they come from?” she asked. “They are Shir-li’s hair,” he answered. Then she asked: “What do you know of her?” “Listen to the swans,” he answered, “they sing now, but only of their own passing.”

Perhaps, the traders said to one another, we will chance to meet in the spring when we return to India. Let us collect tales this winter, to tell each other should we meet.