The Mechanics of Wilbur’s “Mind”

I’ve noticed several searches for this poem (off and on again) so I thought I’d take a look at it. The meter is Iambic Pentameter and the poem itself consists of three quatrains with an interlocking rhyme scheme. The first rhyme of the first quatrain is a slant rhyme – bat/wit. Other than that, everything else about the poem is conventional. There is nothing remarkable about Wilbur’s use of the meter. If I were to criticize the poem, I might call Wilbur’s use of meter perfunctory. Unlike Shakespeare or Donne’s inventive use of Iambic Pentameter, Wilbur’s meter only informs the poem in the most conventional ways. The poem’s three trochees are apt, putting the emphasis on Mind, Not, and Darkly, but the effect is hardly novel.

But metrical expressiveness is not Wilbur’s strong suit.

Rather, Wilbur’s use of meter adds elegance to his language – heightening and elevating his rhetoric. Whether one interprets that as a plus or minus depends on what one expects from metrical poetry. I’m content to accept Wilbur on his own terms, rather than criticize him for what he doesn’t attempt. His use of meter is elegant and accomplished. The “rhythm”, as Wilbur calls it, makes his poems memorable where other poems are less so. 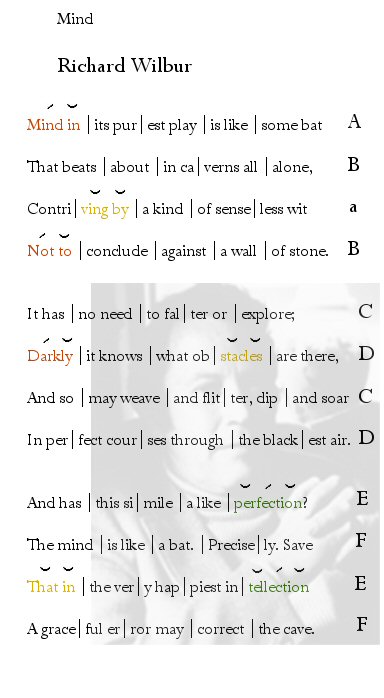 In the third quatrain, Wilbur refers to his poem as a simile, and it surely is, but it is also a conceit. Wikipedia offers up the following definition of a conceit:

The term is generally associated with the 17th century metaphysical poets in contemporary usage. In the metaphysical conceit, metaphors have a much more purely conceptual, and thus tenuous, relationship between the things being compared. Helen Gardner[2] observed that “a conceit is a comparison whose ingenuity is more striking than its justness” and that “a comparison becomes a conceit when we are made to concede likeness while being strongly conscious of unlikeness.”

So… Wilbur is being a little disingenuous in referring to his poem as a simile. That said, the whole of the poem is really no more than the working out of Wilbur’s initial simile, The Mind is like a bat – a genuine tour-de-force. Wilbur’s skillful use of the extended metaphor is the mark of his uniqueness (his particular gift) among nearly all other 20th and 21rst century poets.

Mind in its purest play is like some bat
That beats about in caverns all alone,
Contriving by a kind of senseless wit
Not to conclude against a wall of stone.

The first quatrain is, on the surface, very straight forward.  However, the only element of the simile that is spelled out is the bat. The bat is like the mind. The mind is like the bat. After that, the more one tries to discern the different elements of Wilbur’s  “simile”, the more one wonders exactly what each element is like. Besides having a predilection for simile, metaphor and analogy, Wilbur is also unique among modern poets for his delight in riddles.  If memory serves, the oldest surviving poem in the English language is a riddle. I doubt anyone would claim that all English poetry is descended from a riddle, but there is an element to the riddle in all poetry – and I’ve always noticed that strains prevalence in Wilbur’s poetry. What are the caverns?

All that Wilbur gives us, by way of a hint, is “senseless wit”. In this quatrain, at least, Wilbur appears to be describing instinct. Or… there’s another possibility, but let’s see what he writes in the next quatrain.

It has no need to falter or explore;
Darkly it knows what obstacles are there,
And so may weave and flitter, dip and soar
In perfect courses through the blackest air.

Again, the poem has more and more the feel of a riddle. There are apt words, but one gets the feeling that there’s a double meaning at work – Darkly, obstacles, weave, flitter, perfect courses, blackest air.

In the final quatrain, Wilbur will ask: “has this simile a like perfection?” I can’t help but notice a teasing, impish tone to this question. There’s something sly about it. In fact, the simile isn’t perfect at all. Bats don’t “know” where obstacles are. Their  “wit” isn’t “senseless”. They echo-locate, constantly…

If a bat becomes lost in your house, don’t cringe in a corner. Here’s something you might not know. If a bat can’t escape from a room after a certain period of time, it will indeed assume that it knows all the obstacles. It has memorized your room. It will stop echo-locating and fly and fly and fly – no matter what windows you open. A memory is like an opinion. In a sense, the bat becomes trapped by its own opinion. The bat won’t falter. The bat/mind assumes that it has no need to explore. The most inflexible opinions are the loneliest ones and, as Wilbur tells us at the outset, the mind is like the bat that beats in its cavern all alone. The bat or the mind’s  wit seems more senseless than wit.

That is, the mind remains in the dark of ignorance. Obstacles are perceived through ignorance. And yet, in the ruff of its opinion, the mind weaves its “perfect courses” through the blackest air. How does one interpret blackest air? I can’t help but read irony in these lines. We all know that the mind isn’t perfect.  It is subject to any variety of ailments, the worst of them being self-delusion – the blackest air. (After all, the double meaning of air is when one puts on airs.)

The word perfect shows up again. What is Wilbur really asking? If one reads a certain impishness in this question, then the word perfection takes on a very different tone. In case the reader missed it the first time, it mocks the perfection of the bat or the mind’s perfect courses.

If, having read this far, I’ve spoiled the poem for you, consider this: The most famous analogy  in all of Western Literature is that of Plato’s Allegory of the Cave. Given Wilbur’s erudition, I find it hard to believe he didn’t have this in the back of his mind.  The Allegory of the Cave is all about the human mind so confined within the cave of its opinion that it ceases to consider other possibilities or realities. The denizens of Plato’s cave never faltered in their beliefs and never felt the need to explore.  The denizens darkly understand what they perceive to be reality. Their wits are senseless in that they lack the one sense only appreciated by leaving the cave.

Consider the double meaning hidden in the word conclude – line 4 of the 1rst Quatrain. It was precisely by looking against a wall of stone that the denizens of Plato’s gave drew their conclusions. And they were wrong. They contrive with a “senseless” wit not to “conclude” against a wall of stone, and yet this is precisely what the human mind does in the act of contrivance.

Precisely. Save
That in the very happiest intellection
A graceful error may correct the cave.

The simile is “perfect”, except for the happiest (which also means fortunate) intellection (or perception). A graceful error “may correct the cave.” Though Plato, speaking through Socrates, doesn’t reveal how one of the trapped men came to be released from his cave, the moment might be described as fortunate and a moment of grace – perhaps, even, a grace–full error.  Whatever the reason, the moment of happy intellection, of grace, of graceful error, “corrects the cave”.

Note: I just recently reviewed a collection of poetry by Robert Bagg, his book Horsegod. As it turns out, Bagg knows Wilbur and is presently writing a critical biography on the poet. I was pleased that he approved of my interpretation and also pleased by his suggesting a facet I had missed. The “graceful error”, he suggested, refers to Adam and Eve’s fall from grace in the Garden of Eden. And it is through this error that “we are offered an even better garden than Eden”. This is a convincing interpretation. To paraphrase Bagg, Wilbur has “fused” the concerns of Plato and Paradise Lost.

I think it’s no accident that Wilbur closes with the word cave, rather than cavern.

If my interpretation is correct, then the final word is also our final hint as to the true meaning of the poem – the poem itself is like the cave, waiting to be corrected by the happiest intellection of the reader. The graceful error of the perfect simile will be corrected.

Or, in the case of the bat, if you open the window, the bat will be freed to correct its false conclusions.

Then again, Richard Wilbur is still alive, migrating seasonally between Massachusetts and Florida. Send him a letter and ask him what he meant!