Two swallows, black holes, gravitational waves and a barn light. My wife tells me the barn light symbolizes science, our barn is the storehouse of human knowledge, and the forest is the unknown—or the yet to be explored. How’s that?

o me, the confirmation of Gravitational Waves is the biggest story of the year. My wife made a block print to celebrate the event. The barn is our own and the swallows circling above it? Think of them as the two black holes detected by LIGO last September 14th. Sort of a Vermont way to think of these things I suppose. She also made a little E=MC2 stamp to add to the block print. Soon as she adds it, I’ll post that too; but I couldn’t resist posting these first. You can see more on the Block Prints page.
· 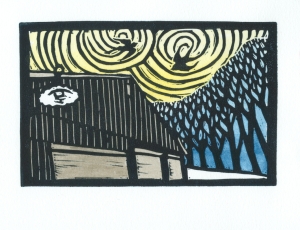 ore of my wife’s block prints. You can see more on the Block Prints page. The owl is based on a picture we took of an owl that visits us over the course of the winter. She sits on the bird feeder waiting for rodents to pick through sunflower seeds. I’ve seen her dive several times, then knock back a rodent on a nearby branch. She also killed one of our chickens, ate the head; then causally walked up the chicken ramp and decided a night in the chicken coop was a night at the buffet. A beautiful, beautiful, bird.

More of my wife’s block prints. You can see more on the Block Prints page. Click on the images to enlarge. The first is with black ink, and the second (because it’s Valentine’s Day and because she was momentarily out of black, is with red).

Another of my wife’s block prints. You can see more on the Block Prints page.

My wife has been busy printing block prints this past year. I’m going to post them over the next week. One of her ambitions this summer is to buy an electric bicycle. The older one gets, the bigger Vermont’s mountains.

My lovely wife reminds me, and reminds all who don’t already know, that April is National Poetry Month. Celebrate your favorite Vermont poet, whoever that may be, with a hand pulled Vermont Plate block print. Each print signed by the artist, my wife, measures 4″ by 6″ on paper approximately 11″ by 15″, can be easily cut to size and framed. Printed with water based ink in her Vermont kitchen studio. $30 plus shipping. Click here to order or to inquire.

14. Better Idle
A Fable That Follows: One Part Genius 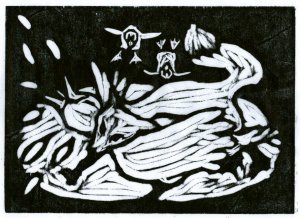 All day, the farmer muttered to himself: “If not this then that, not that then this.” Maybe the fox had the right idea: easier to steal chickens than raise them. “Ol’ Jack Smith took a few unwarranted shots at me!” Then he said to himself: “Jack owes me some chickens for that! Aye!” The farmer went that night and stole four of Jack Smith’s chickens. The next morning he slept late and so didn’t notice when Smith’s wife came for advice as to how foil a fox.

When the farmer returned the next night, he soon heard Jack Smith’s wife at the door of the coop. He leapt onto the nearest shelf. “Well, well, well,” she said, “you all look like chickens but I see that one has lost his feathers. Are you ill?” The wife took the chicken by his nose, squeezed until he opened his mouth and poured some castor oil down his throat. “That will help!” she said. Once she left, the wretched farmer staggered out of the chicken coop, coughing and choking. “Such a racket!” said Jack Smith’s wife and she came out of the farmhouse.

When she saw the fat old chicken doubled over in front of the coop, she took a rug beater from the laundry line. “Can’t stand up straight?” she asked. “You need to improve your circulation!” Then she whacked him on the behind with the rug beater. Off he ran, and old Jack Smith’s wife followed him as far as the barnyard fence. “Now you’ll lay a good egg or two!” she called after him. The next morning the farmer sat uncomfortably on the porch. “Will you be hatching any new plans, husband?” his wife asked sweetly. 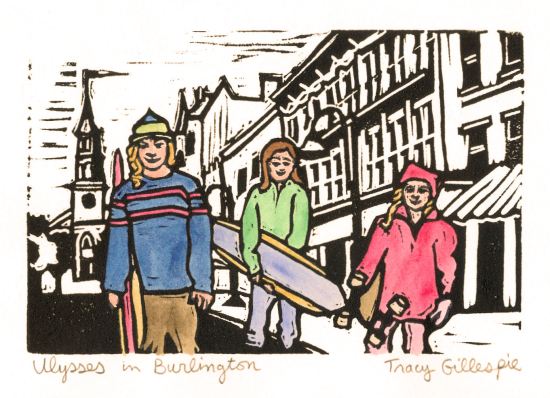 ❧ This has been a long time  in coming. I finally researched the WordPress Gallery feature and have thoroughly updated the Block Prints page (see above). For those of you who have enjoyed my wife’s block prints, a number of new prints have been added and previously viewable block prints have been resurrected. The block print above is of two of my daughters and a friend. She made it as a little something to go along with my poem Ulysses in Burlington Vermont. The two Longboards, by the way, are boards that I made for my daughters. Enjoy.

October 17, 2010 By upinvermont in Block Prints Leave a comment