My other non-poetry related project, after two summers of disappointment, was the arrival of four ducklings, which is when  I realized I had to build a duck house. Being the scrap collector that I am, I had nearly all of the materials on hand (except for the hardware cloth). Most of the frame is made from pieces of treated lumber that had been sitting (and buried even) around  my house for a decade or more. My prize possession was an old cast iron wheel (probably from an old 19th century wheel barrow?) I scrounged it out of the metal recycling dumpster (junkyard opportunist that I am). What poet and story teller, after all, isn’t a junk collector in some small sense? I was determined to put together a mobile-duck-home. Fortunately, unlike our chickens, ducks aren’t budding sociopaths and psychopaths. Their will not be blood if they don’t have x square feet of inviolable duck-space. I based the dimensions on a book by Eliot Coleman called Four-Season Harvest. I knew Eliot Coleman and his family when he was the farm manager at the Mountain School (then a full-time high school) and I was a student there. Ducks like each other (for the most part), and that means a duck house can be smaller than a house with the same number of chickens (at least if all the literature is to be believed — along with the behavior of my own chickens). So, here’s what I came up with:

Note the Minnesota license plate. My daughter scored this old “Thousand Lakes” plate from the same metal recycling bin. Doesn’t it make sense that a duck’s idea of heaven would be the land of a thousand lakes? Anyway, notice the “wheel-barrow” handles. They’re cut from treated decking and eight feet in length. Here’s the duck house with the wheel. The roof extension protects the cast iron wheel and wood tines from rain (and rot):

To the right is a close up of the wheel.

Eliot Coleman said that he built in a hardware cloth floor for his duck house (which was also mobile). He used bolts to hold it in place (and to also make it removable)

. I made mine removable but didn’t want the complications and extra weight of bolts. I designed mine so that the floor slides out. The floor can be easily hosed off. I put burlap on the hardware cloth for the sake of the duckling’s feet (much softer). Burlap can be bought in roles and is very inexpensive. Also, the ability to slide out the floor made the door a touch more complicated. It meant that I couldn’t hinge the door from the sides without some complicated carpentry Kung Fu. Every little feat of engineering genius was going to add weight. I opted for the simplest solution (which I wasn’t sure I’d like) and that was to hinge the door on the top. As it turns out, I like it. I can swing it up and entirely out of the way when necessary.

And that’s that. While I was cleaning, photographing and moving their house, the ducklings were doing their best to be invisible — and that’s a poor defense with three girls around. Remember: 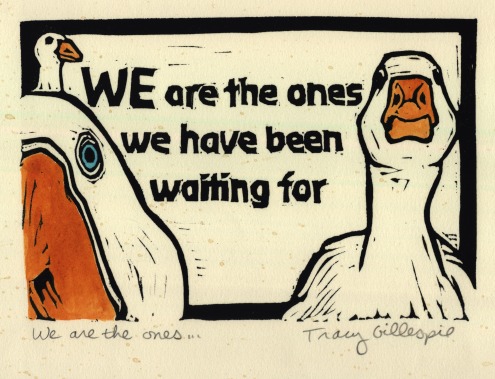 So I’ve been busy carpentering. Thought I’d show off a bookshelf I made for my daughters. The perspective is a little askew. Despite  appearances, it’s not leaning. My daughters painted the roof. The roof is bead board ply. From the top, the roof  has the look of channel drain (something we stumbled on, but kind of cool). My daughters wanted the attic (for their dolls) split into three rooms. They made a ladder (missing in the photo) for the dolls to climb to the attic.

To the left is a doll’s eye view out of one of the windows.

The photo at right was taken after the dolls’ moving van had  arrived. The dolls were very, very excited to be moving in. As you can see, the library was already beginning to be stocked. The poetry section will be on the second floor.  You can also see the ladder, now in place.

The materials were all left over bits and pieces, but to buy the materials new would cost roughly $115 dollars (that’s for #2 knotty pine 1×12 boards, 1/2 inch plywood and bead board top), not including paint and polyurethane. I used water based urethane with an oil suspension because it darkens the wood just a touch better than plain water-based finish. I plan on building another one. It took me about  2 days of work (though it was on and off again). It’s not fine finish work (which I can do) but the dolls’ patience was wearing dangerously thin. I plan on building another one for a silent auction (for our school). If you think you’d like one of these, send me an E-Mail. Not sure how I’d get it to you, but where there’s a will, there’s a way. P.S. The tall shelf on the left is for those ridiculously big books – an atlas and a couple of astronomy books.