These tales are based on Aesop’s Fables. They are a series which, when read together, loosely tell a larger tale. Enjoy! 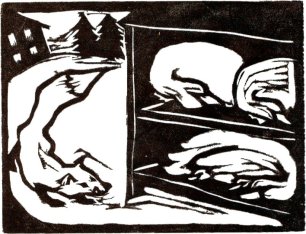 One day the fox decided to have chicken for dinner. He snuck into the chicken coop of the farmer and his wife.  They soon they heard a ‘Squak!’ come from the chicken coop. The farmer said to his wife, “Go out and see if that fox is in the coop.” “If he is,” she said, “I’ll give him a poke he won’t forget.” With that, she took a three pronged fork and was out the door.

The fox had already eaten one chicken. When he heard the farmer’s wife coming, he quickly clothed himself in the chicken’s feathers and sat in its nest. When the wife opened the door, she saw twelve chickens. One had an unusually long snout, but it had feathers. “Well,” she said, “you all look like chickens.” She shrugged and closed the door. No sooner was she walked half way back to her house than she heard two squaks! “Squak! Squak!” She hurried back to the chicken coop. This time there were only ten chickens, and one with a very long snout.

She poked each one and when she came to the fox, the fox said “Bak!” “Well,” she said, “you all sound like chickens!” She left and again she heard three more squaks! “Squak! Squak! Squak!” She rushed back and there were only six chickens but the long-snouted chicken looked plump and plumper. “Well, ” said the farmer’s wife, “we’ll see which one of you flies!” She took her three pronged fork and poked each chicken. Up they flew into the rafters! When she came to the fox and poked, up he jumped and down he fell. “Yowl!” he cried. He bit her on her bottom and ran away! “Ouch!” she howled. “I never! Well,

“There’s more to a bird than feathers!”

Be it known that this fable is  followed by: Where Luck Goes: The second of Several Fables!